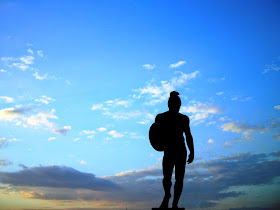 When we view a nativity scene, we generally think of a peaceful scene. Many think of the baby born to a virgin in a manger and the star which rests above. There are peaceful animals, a humble St. Joseph, and scared shepherds.
But, something is missing.

It is the drumbeat of war. Can't you hear it? It is the spiritual battle that rages in places we cannot see with our eyes or hear with our ears. It rages in our hearts.

Even in the peaceful image of Jesus being born, we need to see God warning His people to prepare for battle. The victorious king has entered the fray and he calls us to take up our weapons of prayer, righteousness, chastity, faith, hope, love....

The Army General, Satan, knows he will lose the final battle, yet he fights to ruin as many as he can. He will tempt, deceive, and push you to sin.

Notice how the manger scene cries out WAR IS COMING!
Now it is our turn. If we fail to pick a side in the war, it means we have already chosen:
"he who is not with me is against me."

The drumbeat of war is pounding. Pick up your cross - it is your weapon against the enemy - and follow The King of Kings into battle. He is about to be born as a poor babe to a virgin.