Is Telling a Child About Santa Claus Lying? 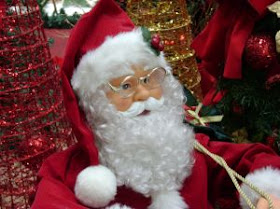 Q -Can we ethically teach our children to believe in Santa Claus? This seems like a lie and I don't know how you could justify it. I was curious what you thought and how you're raising your children if you don't mind me asking.


A - Thanks for the question. I don't mind you asking. In this case I will tell you (later) how we are raising our kids.

As for the answer to your question, there are some very passionate answers on the internet for both sides. I will give you both answers and then what I think at the end.
NOTE - I will try my best to give both sides of the argument.

SIDE 1 - TELLING KIDS ABOUT SANTA IS A LIE AND ALWAYS WRONG.
Some will say that it is always a lie to tell kids about Santa and therefore it is always wrong. There can be no justification. To tell a child that there is a jolly old man who lives with elves at the North Pole is completely false and since lying is condemned by Scripture and the Church, you should not perpetuate such lies, especially when it means that the lie could shatter their hearts when they learn the truth.

Those that argue that Santa is a lie might say the focus should be on the real St. Nick and the celebration of his feast day - Dec 6.
Read more on this side of the argument here.

SIDE 2 - TELLING A KID ABOUT SANTA IS STORYTELLING, NOT LYING.
Others will say that telling a kid about Santa Claus is the same as a work of fiction read to the child, but without telling them it isn't real. Truths can be conveyed in different ways and telling a myth, a legend, or a story isn't lying, but is trying to convey a deeper reality about some truth. We see this in the stories of Tolkien and CS Lewis. So, telling a kid about Santa is equivalent to reading the Narnia series.  We can even see such legends in the stories that have grown up around the life of St. Nicholas, upon whom the stories of Santa are based.
Read more on this side of the argument here.

MY SIDE:
If your conscience says it is lying, then don't tell your kids there is a Santa Claus. But, please don't ruin another child's Christmas by taking it upon yourself to tell them the truth about Santa.

So, there is no hard and fast rule here. The Catholic Church has many myths and legends in the tales of Saints and others. We even have Saints who probably didn't truly exist, but grew out of legends. So, you could say that "praying" to a Saint such as St. Christopher is the same kind of legend as Santa.

With that being said, my family does not do Santa Claus. Our kids have big imaginations and we want them to have the beauty of wonder and awe. We want them to see the world and other things with eyes that can find meaning in stories. So, while we have never taught them about Santa, never had them write letters to him, and have never given them presents from him, we also haven't told them outright that he doesn't exist. If they ask, "is Santa real?" we respond with "what have you heard about him?" We celebrate St. Nicholas day on Dec 6 by exchanging gifts we put in stockings, but the kids know they are from us.

Of course, if we had to do it over again (hindsight is 20/20), then we would probably do a low-key version of Santa.

So, my simple answer is - do what you feel called to do and don't throw those that do something different under the bus. There are good arguments on both sides and a "good" Catholic doesn't have to be put into a box on such issues. There is freedom in Christ on such things.