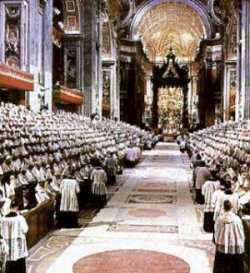 Q - Why did he resign?
A - Because his health was quickly declining and he didn't feel he could adequately provide the leadership The Catholic Church needed.

Q - What will happen to him?
A - According to the Vatican spokesman, Fr. Lombardi, after he officially resigns on Feb 28, he will move to the Papal vacation villa, Castel Gandolfo, until a cloister on the grounds of the Vatican (in the Vatican Gardens) is renovated. Then he will move into the cloister permanently. My guess is that he is staying on the Vatican grounds for security reasons more than anything else. He will no longer be a part of any day-to-day operations of the Vatican and we will hear very little, if any, from him.

Q - What will happen between Popes?
A - The process will be similar to the process after the death of a Pope. There is a time called the "Sede Vacante" which means the See of Peter is Vacant. This time will probably be less than a month or so. The man who has the position known as the chamberlain will be in charge during this Sede Vacante. That post, at present, is held by Cardinal Bertone, who is the Secretary of State of the Vatican.

He will break the pope's ring with a hammer as a sign of the end of his papacy and to prevent any forgery of official papal documents. The papal apartment will be seald off, to preserve any documents left.

The Chamberlain is also in charge of the conclave of Cardinals that will select the next Pope as well as the administration of the Vatican.

Q - When will the next Pope be elected?
A - There is no official timetable that must be followed, but we can expect that a new Pope will be elected before Easter.

Q - How do they select the next Pope?
A - First, there is a Mass the entire conclave of Cardinals (who are under 80 and under and therefore eligible to vote for the Pope) will participate in. Each of the Cardinals must take an oath to keep the deliberations and voting a secret. They are confined to private apartments, without access to outsiders, until they have selected a Pope.

To start the election process, they will draw lots to select 3 cardinals to collect ballots from the other cardinals who are too sick/elderly to hand in their own. Other lots will be drawn for 3 cardinals to count the votes and finally 3 others who will double-check the count.

Blank sheets of paper are given out. The electors will each hand write one name down. They each walk to an altar and place their votes in a chalice. They votes are tallied and then re-checked. The results are announced and then the vote continues until one name gets a 2/3 vote.

After each vote, the ballots are burned. Black smoke if no choice is made. White smoke once 2/3 have selected the next Pope.

Then the new Pope is asked if he accepts, (he can say no) he does, then is dressed and presented as the new Pope.