There are a number of reasons that Benedict's surprising resignation is a good thing, though we will miss him being our Pope. 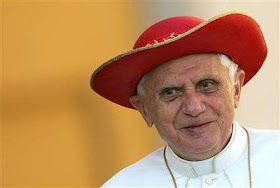 10 Reasons Benedict's Resignation Is A Good Thing
BONUS - it is good for Joseph Ratzinger! He asked JPII if he could resign from the Curia several times and JPII didn't let him. Now he gets to spend time with his books, his music, and maybe a cat. Can't say I blame him.

Benedict XVI, The Catholic Church, the Cardinals, and our future Pope need your prayers. Please join me in praying for these intentions!
at 9:43 AM
Share