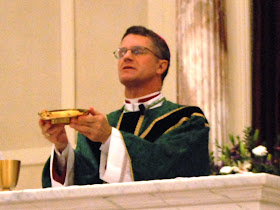 This is another major blow to religious liberty. I really am astonished at this.


On Thursday, January 26, Archbishop Broglio emailed a pastoral letter to Catholic military chaplains with instructions that it be read from the pulpit at Sunday Masses the following weekend in all military chapels. The letter calls on Catholics to resist the policy initiative, recently affirmed by the United States Department of Health and Human Services, for federally mandated health insurance covering sterilization, abortifacients and contraception, because it represents a violation of the freedom of religion recognized by the U.S. Constitution.

The Army’s Office of the Chief of Chaplains subsequently sent an email to senior chaplains advising them that the Archbishop’s letter was not coordinated with that office and asked that it not be read from the pulpit. The Chief’s office directed that the letter was to be mentioned in the Mass announcements and distributed in printed form in the back of the chapel.

Archbishop Broglio and the Archdiocese stand firm in the belief, based on legal precedent, that such a directive from the Army constituted a violation of his Constitutionally-protected right of free speech and the free exercise of religion, as well as those same rights of all military chaplains and their congregants.

Following a discussion between Archbishop Broglio and the Secretary of the Army, The Honorable John McHugh, it was agreed that it was a mistake to stop the reading of the Archbishop’s letter. Additionally, the line: “We cannot — we will not — comply with this unjust law” was removed by Archbishop Broglio at the suggestion of Secretary McHugh over the concern that it could potentially be misunderstood as a call to civil disobedience.

The AMS did not receive any objections to the reading of Archbishop Broglio’s statement from the other branches of service. Continue Reading.

Archbishop Broglio has visited us twice. He is a good man. Please pray for him and for our nation.
at 4:25 PM
Share